Novel roles for peripheral metabolic factors in substance use disorders 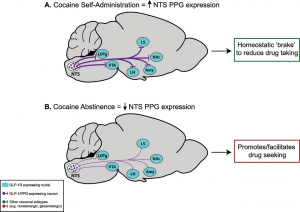 Given that the search for effective pharmacotherapies for cocaine use disorder has, thus far, been fruitless, there remains a critical need for conceptually innovative approaches toward identifying new medications to treat this disease. A better understanding of the neurocircuits and neurobiological mechanisms underlying cocaine taking and seeking may identify molecular substrates that could serve as targets for novel pharmacotherapies to treat cocaine use disorder. Our recent preclinical findings suggest that glucagon-like peptide-1 (GLP-1) receptor agonists could be re-purposed to treat cocaine craving-induced relapse. Specifically, we have identified doses of a GLP-1 receptor agonist that selectively reduce cocaine seeking and do not produce notable feeding and malaise-like effects associated with these medications in humans and rodents. Interestingly, activation of central GLP-1 receptors also decreases the reinforcing efficacy of opioids and other drugs of abuse. Our pilot studies reveal that a GLP-1 receptor agonist decreases oxycodone taking and seeking without compromising the antinociceptive effects of oxycodone. These findings suggest that GLP-1 receptor agonists could serve as adjunct medications that reduce the abuse liability of opioid analgesics in patients treated for chronic pain. Overall, our preclinical studies provide compelling evidence to advance GLP-1 receptor agonists into clinical trials testing the efficacy of these medications to reduce substance use disorders. Current and future studies aim to expand our understanding of central GLP-1 mechanisms that regulate drug-mediated behaviors. We are also exploring novel approaches to targeting multiple neuropeptide systems and the impact of these pharmacotherapies on motivated behaviors including drug taking and seeking as well as aberrant feeding behaviors. 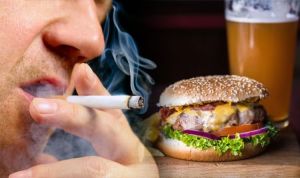 Our research program also includes translational studies of nicotine use disorder. Using the self-administation/extinction/reinstatement paradigm we are actively investigating the neurobioogical bases of nicotine taking and seeking as well as aberrant nicotine withdrawal-induced phenotypes. Increased weight gain during smoking abstinence is commonly cited as the primary motivator for continued smoking and smoking relapse, making post-cessation weight gain and the increased risk for obesity a significant public health problem. Our provocative pilot studies show that administration of a glucagon-like peptide-1 (GLP-1) receptor agonist attenuates nicotine seeking during withdrawal. We are currently working to characterize central GLP-1-focused mechanisms underlying nicotine seeking, over-eating and body weight gain during withdrawal. Results from these study will provide strong rationale for clinical studies examining the efficacy of GLP-1 receptor agonists in nicotine use disorder, as well as development of pharmacotherapies aimed at increasing GLP-1 receptor signaling in the brain to prevent smoking relapse and withdrawal-induced hyperphagia and body weight gain.

An overarching goal of our lab is to identify novel pharmacotherapies to treat substance use disorders. To this end, we screen the efficacy of novel drugs to attenuate voluntary drug-taking and -seeking behaviors.  These include: 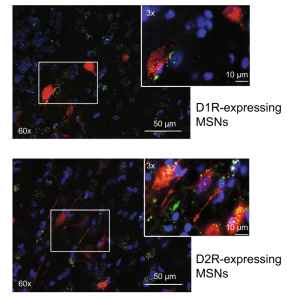 Receptors for metabolic factors including GLP-1 are expressed throughout the brain including nuclei known to play important roles in drug taking and seeking. However, the cell types and neural circuits expressing these receptors are not clearly defined. Therefore, an improved understanding of the cell phenotypes and their target nuclei is required to understand the central mechanisms by

which activation of these receptors affects motivated behaviors. Using transgenic rat models, we are characterizing central GLP-1 circuits. We are also using fiber photometry to study the functional significance of activating GLP-1 receptors in discrete microcircuits.  Expanding our understanding of the central mechanisms by which metabolic factors regulate drug reinforcement will allow us to develop precision therapies targeting specific cell types and neural circuits to reduce drug taking and seeking. 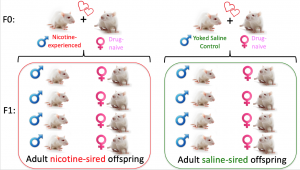 We are also pursing studies examining the inter-generational effects of voluntary parental drug taking. With our team of collaborators, we have shown that male, but not female, offspring of cocaine-experienced sires had decreased levels of cocaine intake and increased anxiety-like behavior compared to controls. My research program is expanding this field to examine the heritable effects of parental nicotine self-administration on behavior and physiology in subsequent generations. Our preliminary studies (not published) are consistent with human epidemiological studies and show that both male and female offspring of nicotine-experienced sires have increased susceptibility to developing nicotine dependence. We continue to pursue these studies and are investigating the effects of paternal nicotine taking on learning and memory in offspring. We are also using unbiased whole genome approaches to identify novel molecular substrates underlying the heritable effects of paternal drug taking.